Which is heavier, 1 kg of iron or 1 kg of cotton? If you are one of the 50% of the people who answered this question. I would say 1 kg Iron. If you check carefully, both are of the same weight as they weigh but, cotton occupies more space than iron i.e. volume of 1 kg cotton is greater than that of 1 kg iron. Why so? 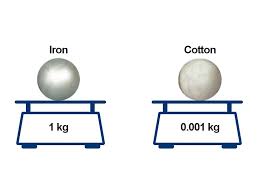 Example: Cube of Iron is heavier as compared to the thermocol’s Cube of the same size and it is calculated by = Mass/Volume. (Density is a measure of mass per volume).

Similarly, the nail sinks because the density of steel is greater than the density of water. Ships and Boats made of steel, so how they float, and since they do float, why do they sometimes sink?

Everyone has heard of gravity, that mysterious force that pulls everything downward, but did you know there is also an opposing force in fluids? Buoyancy is the push to gravity’s pull. It is the force that floats your boat.

Buoyancy is an upward force exerted by a fluid that opposes an object’s weight which comes on the fluid, and it is (as explained by Archimedes’ principle) equivalent to the weight of the fluid that would otherwise occupy the submerged volume of the object, i.e. the displaced fluid. Example: A nail is dense and small so it displaces very little water, therefore it sinks.Whereas in the case of a Ship, its hull/shell/outer doom body is shaped to displace more water than its weight so it floats.

Archimedes, a Greek mathematician, and inventor noticed when he stepped into his bathtub the water level rose. He reasoned that the weight of the replica bell ross water he displaced was equal to the buoyant force in the water, which is called the Archimedes Principle, and this applies to all fluids.